The Regional Universities Forum for Capacity Building in Agriculture (RUFORUM), established by ten Vice Chancellors in 2004, is a consortium of 128 African universities operating within 38 countries spanning the African continent. RUFORUM is coordinated by a Secretariat hosted by Makerere University in Kampala, Uganda. RUFORUM supports universities to address the important and largely unfulfilled role that universities play in contributing to the well‐being of small‐scale farmers and economic development of countries throughout the sub-Saharan Africa region. For more details about RUFORUM, see www.ruforum.org and a profile of RUFORUM activities in this link.

Since its establishment 16 years ago, RUFORUM has been building and consolidating partnerships with Universities and Higher Education Networks in Africa and globally, Consultative Group for International Agricultural Research (CGIAR), African Policy Advocacy Networks, Private Sector, Technical and Vocational Education and Training (TVET Institutions), and Think Tanks in order to transform the continent. Among its thrusts, RUFORUM aims to promote and recognize contribution of scientists and individuals in especially Africa, who are making contributions towards advancing science to address Africa’s development needs. As such, RUFORUM runs a series of awards (see previous awards (Ghana Young Scientist Award)) to promote excellence in the continent.

For the first time, the RUFORUM Triennial Conference (RTC) will be held in West Africa. The conference will be hosted by the Government of Benin and RUFORUM Member universities in Benin in December 2021. In commemoration of the RTC, RUFORUM will issue a second call for the Young Scientists Award to recognize young upcoming scientists in Universities and other research institutions in Benin. There will be three awards from three award categories (please see award categories below). Each recipient will receive a citation and a token financial award,

Eligibility Criteria
•    Individual from a Benin University/Research Institution
•    Has completed at least MPhil/PhD or equivalent degree
•    Must be born on or after May 1, 1991

Activity entered for this award must have been:
•    undertaken no more than five (5) years prior to the closing date of entries
•    published in one or more respected, externally-refereed scientific journal(s), book(s) or equivalent electronic publication(s) and the publication must be indexed for example in Scopus.

To Submit your Nomination Form 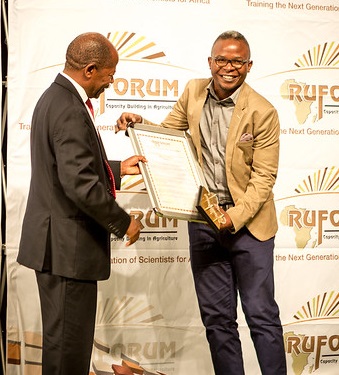