Vice-Chancellor of University of Eldoret 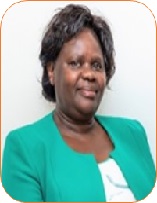 A chemist by training, Professor Akenga has a lot of experience in training, research, leadership, and management, having served in various academic and administrative roles both in Kenya and Rwanda. Prior to her elevation to be the founding Vice-Chancellor of University of Eldoret, she has also served in other top managerial positions as a Deputy Vice-Chancellor in charge of Academics, Research and Extension in The Management University of Africa (MUA) and as a Deputy Principal, Academic Affairs in Bondo University College currently re-named Jaramogi Oginga Odinga University of Science and Technology (JOOUST).

As a leader, Prof. Akenga is a member of various regulatory professional bodies which comprise of the Royal Society of Chemistry (MRSC), The Pan African Chemistry Network (PACN), International Union of Pure and Applied Chemists, African Dry Land Alliance for Pesticidal Plant Technologies – Kenya Chapter (ADAPPT-K), Kenya Chemical Society (KCS), Society of Environmental Toxicology and Chemistry (SETAC), Consortium on Science, Technology, and Innovation for the South-Medicinal Plant Network. She is also a member of the Executive Committee of the Inter-University Council of East Africa (IUCEA) representing all public universities in Kenya since July 2016 and a representative of Vice-Chancellors at the Board of Kenya School of Government since December 2016.

University of Eldoret as an epitome of Agriculture, Blue-economy, and Innovativeness in the region has witnessed tremendous upgrading under her leadership. As a pioneer Vice-Chancellor currently in her second-term, Prof. Akenga has overseen the steady rise of the student's population to a total of over 15,000 students. She has overseen the completion of a number of capital development projects which has transformed the image of the University. She has also enhanced quality teaching, academic excellence and promoted research and innovation through enhancing linkages and collaborations with key partners and stakeholders within the University operating environment. Last but not least, she has enhanced sound governance in the University through compliance with the Mwongozo code of governance.