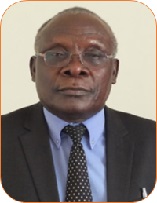 Prof Lugujjo has undergone quality training in engineering and mathematics from Uganda and the United States of America. He is holder a first class BSc. degree in Mathematics and Physics from the University of East Africa (Makerere University Uganda) and masters’ and doctorate degrees in Electrical Engineering at California Institute of Technology, USA. He is now an excellent Professor of Engineering with an academic and research career that spans over forty five years. He has contributed to the advancement of knowledge and technology to the field of engineering and mathematics by founding research in the area of ion implantation, electron hole droplets, silicates, solid epitaxy, backscattering and channeling all of which have led to the advances in semiconductor devices technology. He has mentored and graduated many students throughout his career. While his current focus is in leadership and strategic university management, he has maintained active research and teaching interests in electrical materials, solid state devices, electromagnetism and fields as well as in the application of charged particles to the study of solid-state problems related to semiconductor materials and devices.

Prof. Lugujjo has been an active reformer. In the early years of his career, he recognized the special place that science and mathematics have in the technological and economic advancement of any country. He thus led a crusade in science teaching, in particular physics and mathematics. Not only did this see a demystification of physical sciences in Uganda, but also remarkably attracted more female students into the discipline of physical sciences leading to increased enrollment in science and engineering. Apart from this, Prof. Lugujjo has actively served in the science, technology and innovation policy environment in Uganda and Africa region. Accordingly, he has served in various capacities in Boards championing quality institutional management, including; Industrial Training Council in Uganda, Uganda National Bureau of Standards, UNESCO Board in Uganda, Board of Trustees of Uganda Private Vocational Institutions and the Finance and Administration Committee of RUFORUM. He has strengthened partnerships for advancement of university education and has been instrumental in institutional governance in Uganda. He has had engagement with several development partners including international banks, civility society organisations and private sector institutions. He authored a book “The Management of University Industry Relations” published by International Institution of Educational Planning-IIEP (UNESCO) September 2000 - ISBN: 92-803-1194-8). He was instrumental in the establishment of the Uganda Qualification Framework and is a focused advocate for the application of Technical and Vocational Education and Training in the modernisation of agricultural practices, agribusiness and entrepreneurship. Prof Lugujjo remains committed to the service of humanity as a Rotarian and is a Co-Founder of Greenhill Academy schools in Uganda.